Reliably at the service of Greek pharmacies

With a 25-year experience in pharmaceutical trading, it supplies more than 650 pharmacies and 100 pharmaceutical distributors in Greece (via the third-party logistics division) and is one of the leading companies in the pharmaceuticals trading field.

In 2018 absorbs pharmaceutical distributor V. Tsitsas and strengthens its third-party distribution services and the provision of Logistic management and storeroom organisation services.

In 2019, Profarm S.A acquires 50% of Medworld O.E., a company that is active in the importation and trading of para-pharmaceutical products on an exclusive basis, providing high technology products to Greek pharmacies.

Since 2006, Profarm S.A. has adopted the Quality Principles and has maintained its certification according to International Standard ISO9001 in its occasionally updated version by an Independent Certification Provider.

Since 2013, by decision of EOF/Health Ministry, Profarm S.A. has a permit to attach a certification band ensuring authenticity for pharmaceutical products.

In May 2018, with sensitivity and a feeling of social and environmental responsibility, Profarm S.A. developed and is practicing a system of environmental administration according to International Standard ISO 14001:2015 and was certified by an Independent Certification Provider.

In June 2018 Profarm S.A. received certificate of Approval by an Independent Certification Provider according to the demands included in paper no. ΔΥ8δ/1348ΓΠ/οικ.1348:2004 (ΦΕΚ 32 Β/16-1-2004) of the Greek Ministry of Health and Welfare for the movement of medical-technical products.

Profarm Group today holds a leading position in the field of distribution of pharmaceutical and para-pharmaceutical products. With the immediate and quality service provision to pharmacies their target, Profarm Group constantly develops their distribution network with their modern fleet of temperature-controlled vans, which covers not only pharmacies’ daily needs but also any urgent order.

The products are delivered safely and reliably by professional drivers using company-owned distribution vehicles that fulfil the specification for safe transport and delivery of pharmaceutical and para-pharmaceutical products (Good Distribution Practices). 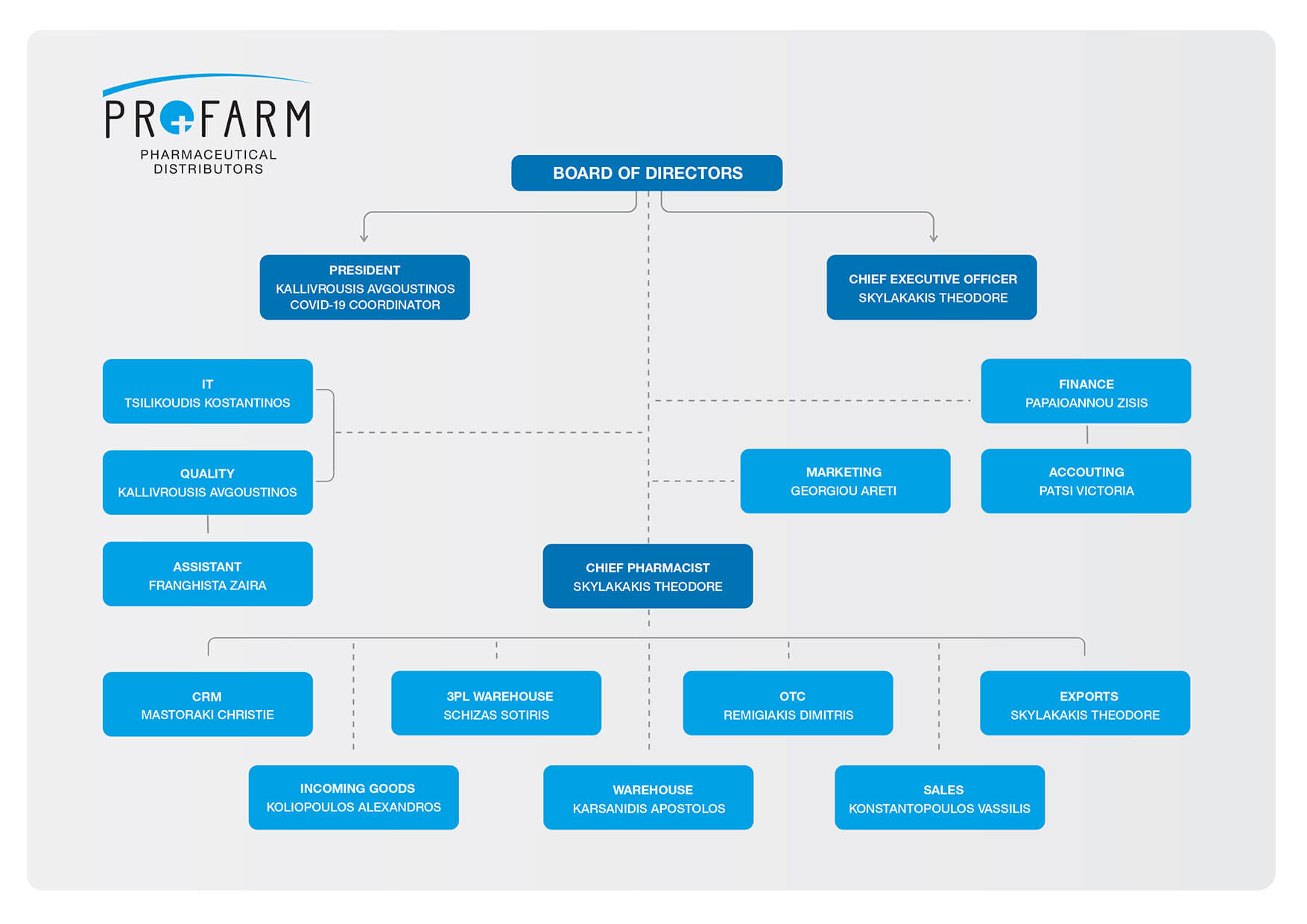 The Board of Profarm, with securing their clients’ satisfaction as their guiding principle and having as their top priority the health of the consumers, is committed to applying a Unified System for Quality Control per EN ISO 9001-2015, EN ISO 14001-2015 as well as the occasional rules for Correct Storage and Distribution (GSP’s and GDP’S).

The application of the Unified System for Quality Control fully reflects the operation of the company, following all relevant Greek and EU legal requirements, aiming at continuously improving our effectiveness while respecting all involved - clients, employees, the environment and all others involved in whatever way.

Within this framework, targets and effectiveness ratings are set and constantly monitored in order to ensure:

Certiﬁcate from Ministry of Health (EOF) 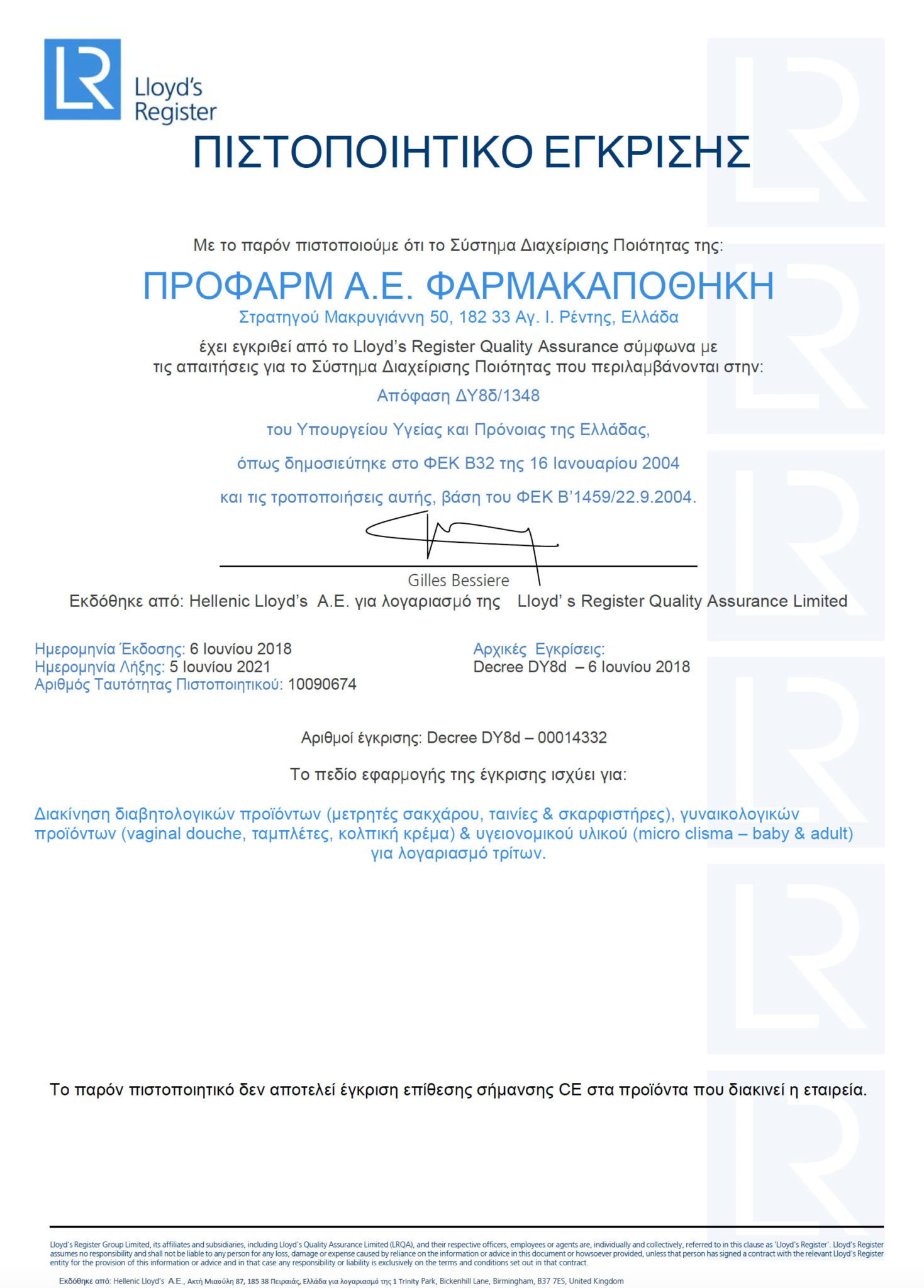 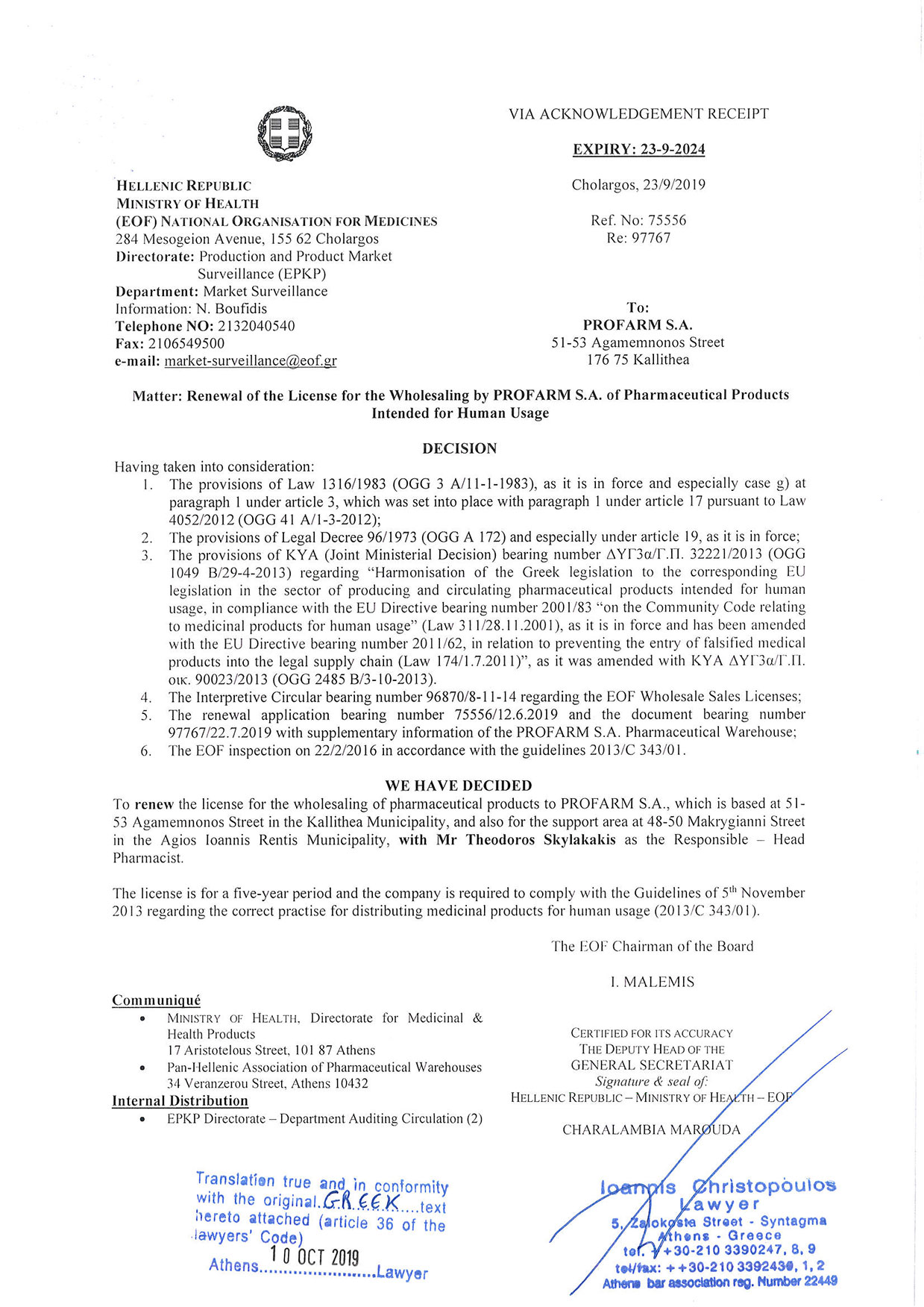 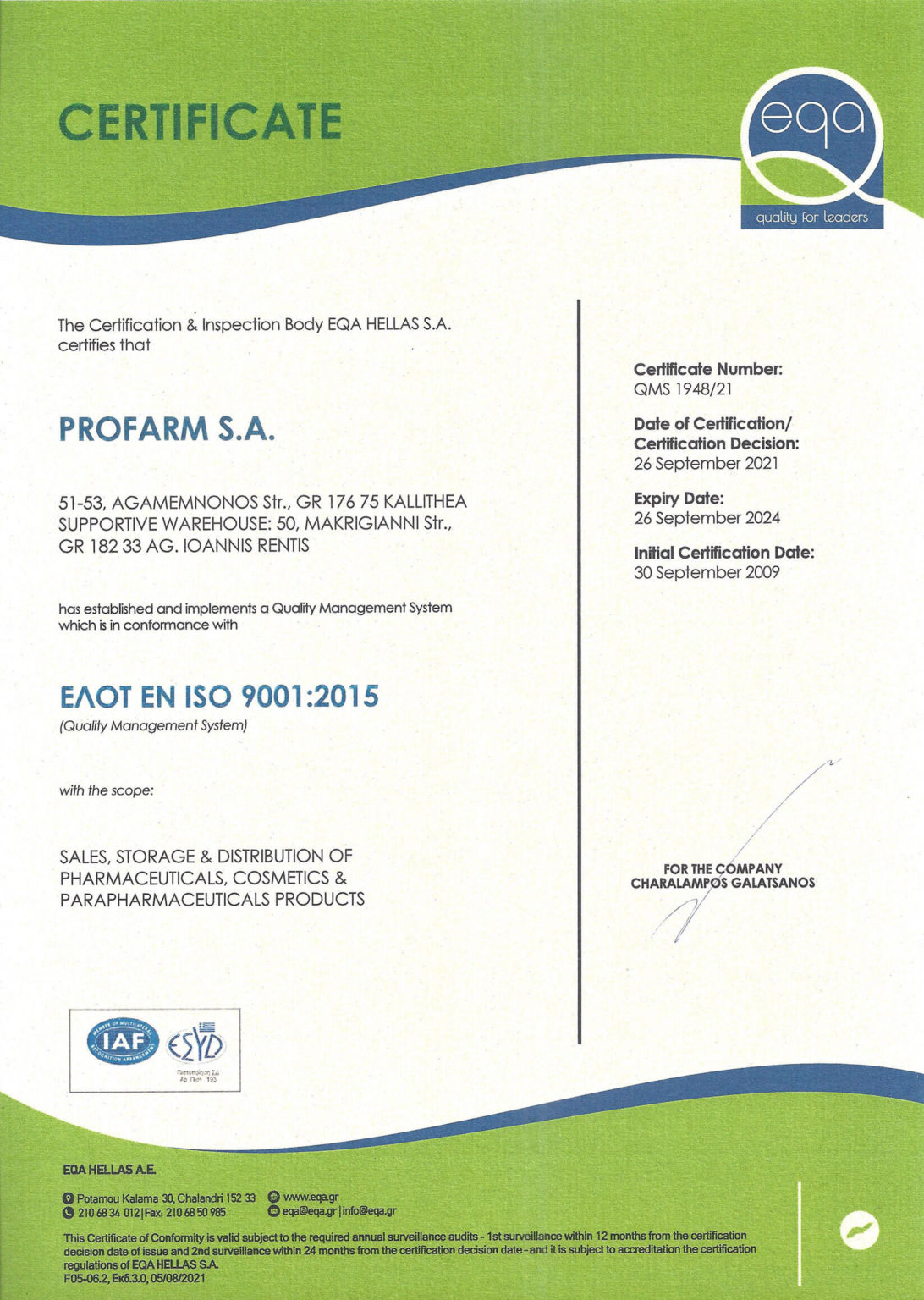 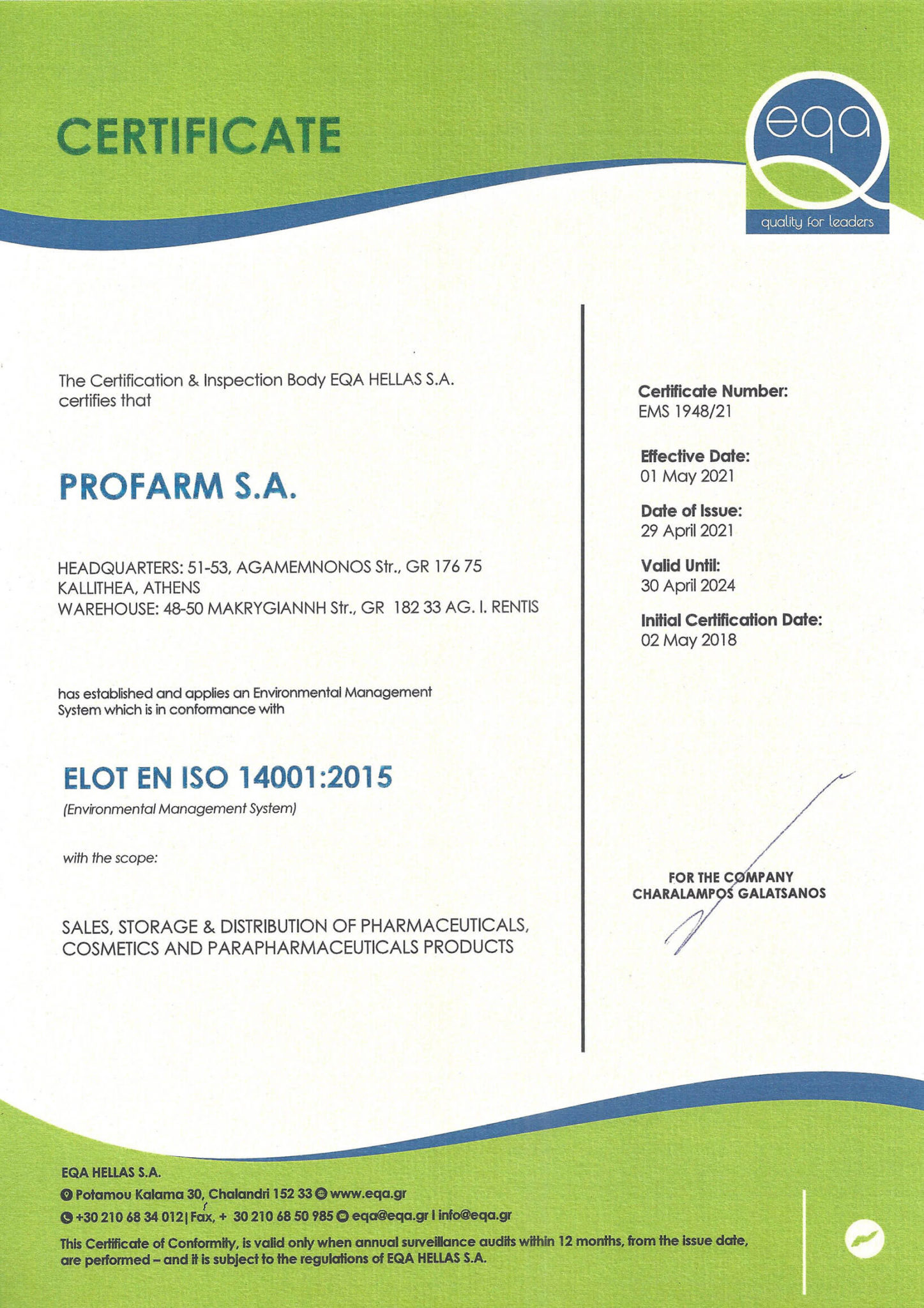